Once the Bailey Boat Cat book proposal was accepted and signed off by the Bloomsbury sales and editorial team, the figures and costings had to be calculated before the book idea was put forward to the acquisitions team. Once everything was approved at Bloomsbury’s end, we discussed and agreed on the terms of the publishing contract and then my contract was signed and everything became official.

I’d heard of advances and royalties before, but I certainly didn’t really understand them. I had no idea what net receipts meant, (the publishers receipt’s after bookshop discounts, etc.) or what was normal in terms of figures or copyright laws. It was at this stage of the process that I felt most excited, but also most out of my depth. After a little bit of research, I discovered that I could join the Society of Authors who offer their members a service where they read and vet publishing contracts clause by clause. Without the Society of Authors I wouldn’t have had any idea whether what I was signing was standard or fair.

Of course I knew that a prestigious publisher such as Bloomsbury were unlikely to be offering me anything other than the industry standard, but I was very grateful to the society for giving me piece of mind. The Society of Authors actually did help me to tweak the contract in my favour. As a previously unpublished author, of course, I wasn’t expecting lots of money to be offered up front in the form of an advance or huge royalties. The society did, however, suggest and help me to change one of the clauses to have my royalties increase after a set amount of sales. This effectively meant that if the book sold well, then I would also earn slightly more money, which luckily it did. For me, Bailey Boat Cat has never been about making money, but more about the creative outlet and the enjoyment of it. I was so excited about actually getting a real book published, that I wasn’t really concerned about earnings, although of course they’re nice too! I did want to be sure, however, that I could continue with the blog and still have a creative licence over Bailey’s character after the book was published. A few clauses were tweaked and a couple were taken out altogether, but thanks to working with professionals on both sides everything was very quick and easy.

Bailey gave the contract his paw of approval and everything was signed and made official. 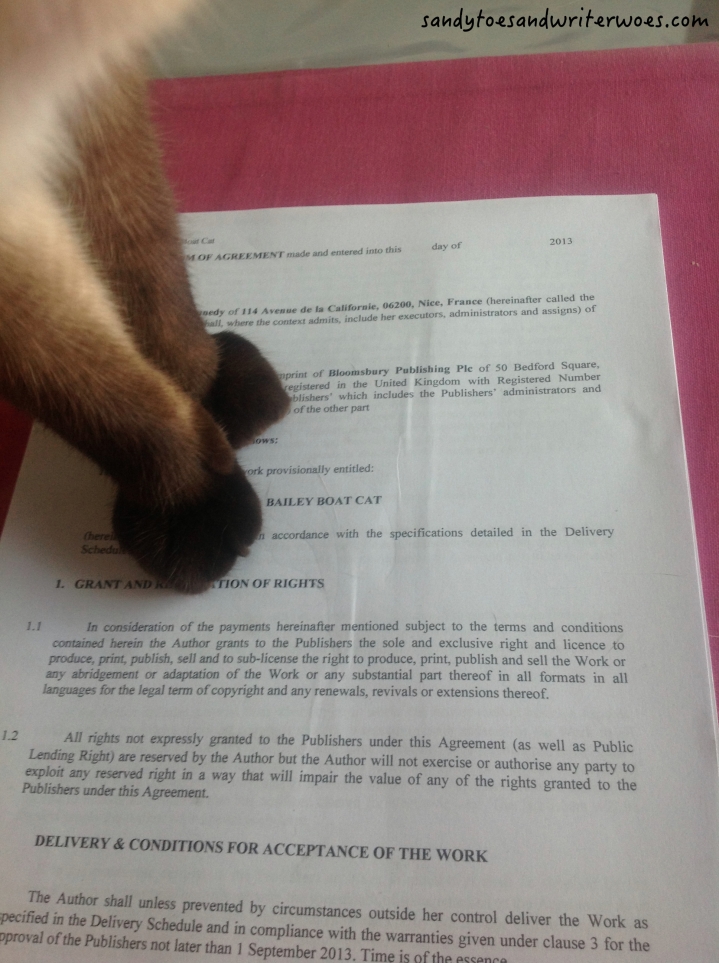 I’m off on holiday next week, so join me the week after to find out what happened next in the Blog to Book journey.

Wishing you all sandy toes and lots of creativity!