Once the contract for Bailey Boat Cat had been approved by all parties and signed, I got to work on the actual manuscript. During the contract stages we’d discussed deadlines, and initially I was quite surprised by how quickly Bloomsbury wanted the manuscript written. In total, I had about two months to get the manuscript of around 10,000 words written. I also had to do multiple ‘photo shoots’ with Bailey to get all of the photos needed for the text.

*
At an agreed midway point I sent my editor the first two chapters of the book so that we could both discuss the way things were shaping up. Happily, we agreed that the manuscript was going in the right direction and after a few suggestions from Jess, I continued to write it. I absolutely loved writing the book and I hope that enthusiasm comes across when people read it.

I took all of the photos for the book. As a passionate but amateur photographer, it took lots of time and patience to get the right shots and of course for Bailey to cooperate!

*
Many people have asked me whether the photos inspired the text, or if it was the other way around. In all honesty, for Bailey’s blog it had mostly always been the photos that had inspired the text, but of course for the book I had an in-depth plan and certain areas that needed to be covered. This meant the photography aspect of the book was much more challenging than the blog had ever been. Luckily, Bailey is very curious (read nosey!) so, with a little persuasion, I managed to capture everything that I needed to well before my deadline. Of course the photos needed to be a high resolution, so I used my Canon EOS 550D to shoot with. The images were fairly large file sizes, so together with Bloomsbury, we decided the best way to share them would be through a joint dropbox account. This worked very well. 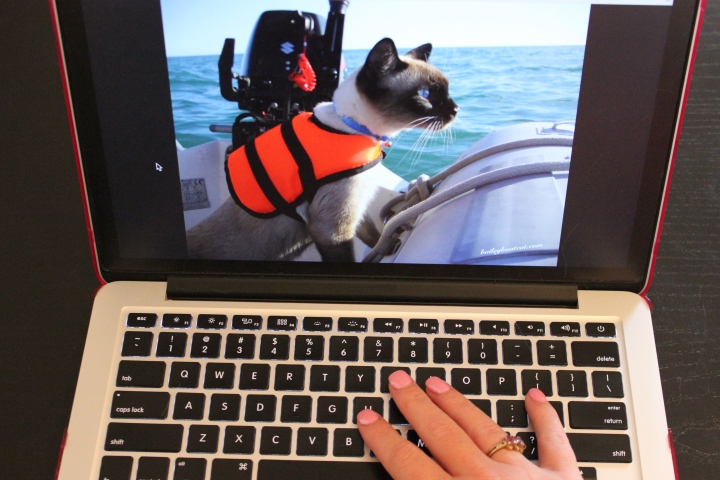 *
Once I’d sent off the manuscript my editor, Jess, read everything and suggested some areas to change and tweak and once we were all happy that the manuscript was the best it could be, my job as the writer and photographer was done. My job as a marketer however, was only just beginning!

Join me on Wednesday to find out all about the cover of the book, which was one of the most fun elements in the Blog to Book process.

Wishing you all Sandy Toes and cooperative photographic subjects!

5 thoughts on “Blog to Book Series (Part 4) – The manuscript”